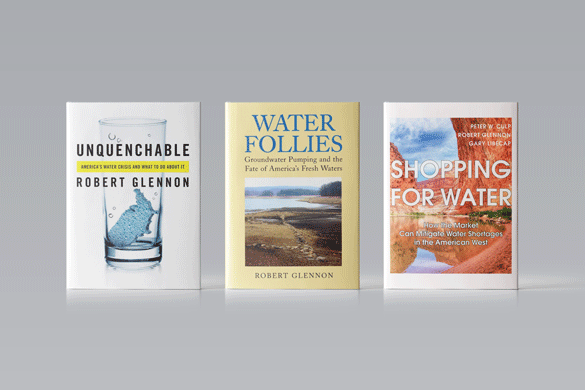 Robert Glennon is the author of Unquenchable: America’s Water Crisis and What To Do About It; Water Follies: Groundwater Pumping and the Fate of America’s Fresh Waters; and Shopping for Water: How the Market Can Mitigate Water Shortages in the American West. 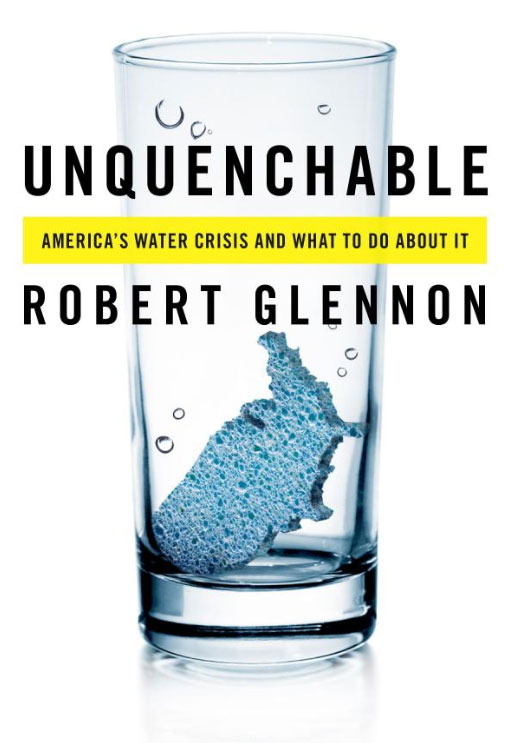 UNQUENCHABLE: America’s Water Crisis And What To Do About It

Deep in the Mojave Desert sits Las Vegas.  In Sin City, a torrent of water flows freely in massive fountains, pirate lagoons, wave machines, and casinos.  Meanwhile, across the country in places that are not particularly dry or hot, communities, farmers, and factories are struggling to find water, and even running out altogether.  America’s self-inflicted water crisis is spreading, and more quickly than you might think.

In a book that is both frightening and wickedly funny, acclaimed author Robert Glennon captures the tragedy–and irony–of water in America.  From the Vegas Strip to faux snow in Atlanta, from our supersized bathrooms to mega-farms, from billion-dollar water deals to big time politics and personalities, Unquenchable tells the shocking stories of extravagances and waste that are sucking the nation dry.

Our water woes will only grow with new demands for this forgotten resource.  Take Washington’s love affair with biofuels: it will turn to heartbreak once America realizes that thousands of gallons of water are required to produce one gallon of fuel.

Glennon argues that we cannot engineer our way out of the problem with the usual fixes or the zany, but very real, schemes to tow icebergs from Alaska or divert the Mississippi River to Nevada.  America must make hard choices–and Glennon’s answer is a provocative market-based system that values water as a commodity and a fundamental human right. 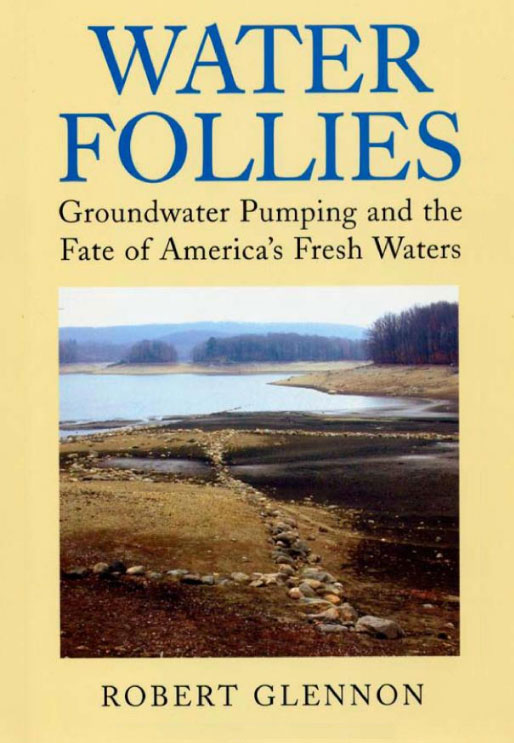 The Santa Cruz River that once flowed through Tucson, Arizona is today a sad mirage of a river. Except for brief periods following heavy rainfall, it is bone dry. The cottonwood and willow trees that once lined its banks have died, and the profusion of birds and wildlife recorded by early settlers are nowhere to be seen. The river is dead. What happened? Where did the water go?

As Robert Glennon explains in Water Follies, what killed the Santa Cruz River—and could devastate other surface waters across the United States—was groundwater pumping. From 1940 to 2000, the volume of water drawn annually from underground aquifers in Tucson jumped more than six-fold, from 50,000 to 330,000 acre-feet per year. And Tucson is hardly an exception—similar increases in groundwater pumping have occurred across the country and around the world. In a striking collection of stories that bring to life the human and natural consequences of our growing national thirst, Glennon provides an occasionally wry and always fascinating account of groundwater pumping and the environmental problems it causes.

Glennon sketches the culture of water use in the United States, explaining how and why we are growing increasingly reliant on groundwater. He uses the examples of the Santa Cruz and San Pedro rivers in Arizona to illustrate the science of hydrology and the legal aspects of water use and conflicts. Following that, he offers a dozen stories—ranging from Down East Maine to San Antonio’s River Walk to Atlanta’s burgeoning suburbs—that clearly illustrate the array of problems caused by groundwater pumping. Each episode poses a conflict of values that reveals the complexity of how and why we use water. These poignant and sometimes perverse tales tell of human foibles including greed, stubbornness, and, especially, the unlimited human capacity to ignore reality.

As he explores the folly of our actions and the laws governing them, Glennon suggests common-sense legal and policy reforms that could help avert potentially catastrophic future effects. Water Follies brings to life the human and natural consequences of our growing national thirst.  Glennon suggets common-sense legal and policy reforms that would address the most egregious situations and help minimize potentially catastrophic future effects. 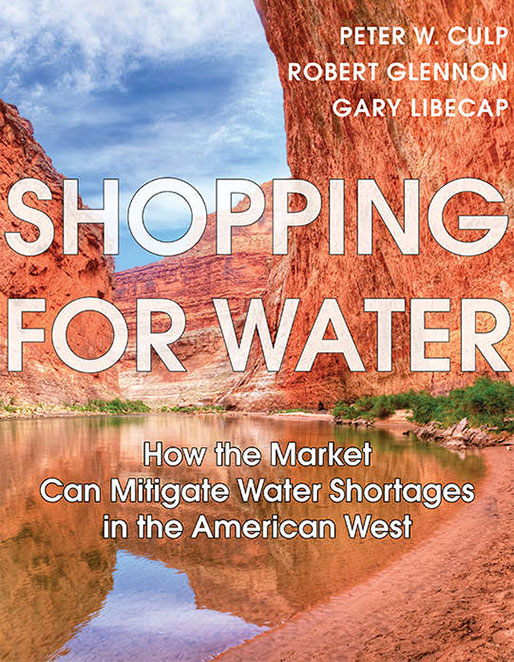 Shopping for Water: How the Market Can Mitigate Water Shortages in the American West

The American West has a long tradition of conflict over water. But after fifteen years of drought across the region, it is no longer simply conflict: it is crisis. In the face of unprecedented declines in reservoir storage and groundwater reserves throughout the West, Shopping for Water focuses on a set of policies that could contribute to a lasting solution: using market forces to facilitate the movement of water resources and to mitigate the risk of water shortages.

Shopping for Water begins by reviewing key dimensions of this problem: the challenges of population and economic growth, the environmental stresses from overuse of common water resources, the risk of increasing water-supply volatility, and the historical disjunction that has developed between and among rural and urban water users regarding the amount we consume and the price we pay for water. The authors then turn to five proposals to encourage the broader establishment and use of market institutions to encourage reallocation of water resources and to provide new tools for risk mitigation. Each of the five proposals offers a means of building resilience into our water management systems.

“Low on H2O: Can We Slake the Nation’s Thirst for Water?” – Environmental Law Institute, The Environmental Forum – Sept./Oct. 2009
Review: Low on H20 (PDF)

“One Book One Week One Year” blog – August 22, 2009
http://onebookoneweekoneyear.blogspot.com/2009/08/book-fourteen-unquenchable-americas.html

“Pissing Away Our Future” – The New York Review of Ideas, June 2009.
http://www.newyorkreviewofideas.com/2009/06/pissing-away-our-future/

Published Comments:
“[I]f you want to scare yourself silly, read Water Follies, by Robert Glennon.  In it you’ll learn how America is irrigating itself to death–just like the Sumerians–while sucking its groundwater aquifers dry.”
–Margaret Atwood, Toronto Globe & Mail

“…a book as rich in detail as it is devastating in its argument.”
–Scientific American

“Glennon offers a dozen examples from around the country, each chapter a gem that moves the story beyond the arcane world of water law, politics, and the physics of centrifugal pumps–and frequently takes it straight to the reader’s stomach…But the book is just as much about the search for solutions, and Glennon rounds it out with a battery of thought-provoking suggestions about what we might do differently in the future–instead of just turning to a bigger pump.”
–High Country News

“His breezy style renders the subject far less arcane and technical than it might sound…[A]n array of informative stories that should contribute to shaking us out of what Glennon calls ‘the unlimited human capacity to ignore reality.’”
–The Washington Post

“Regardless of one’s political or environmental leanings, this book is a wake-up call that all citizens will ignore at their own risk.”
–The Oklahoma Observer

“To … Glennon, the names Perrier and Poland pack a fearful punch, for they and the other huge producers of bottled water are feeding a craze that puts the environment on the brink of disaster.”
–Publishers Weekly

“The deleterious effects that supersize portions pose to human health have been well documented.  Now to the list of obesity, heart disease, and bad skin we can add a new evil: wasted water…Water Follies…shows how each revolution in fry uniformity has come at an ecological cost.”
–Mother Jones